Ann Heymann at the Wighton Centre 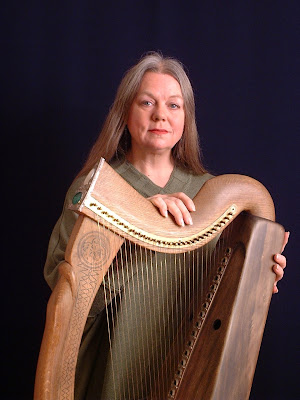 On Saturday 8th December, the master of the ancient Scottish and Irish harp, Ann Heymann, will be performing and teaching at Dundee’s Wighton Centre.

Ann will perform a Cappuccino Concert on Saturday morning with her husband, singer and multi-instrumentalist Charlie Heymann. The cappuccino concert series organised by the Friends of Wighton is a monthly favourite in the Wighton Centre, upstairs in Dundee Central Library. Admission is £5 which includes coffee and newspapers served from 10.30am. The music starts at 11am and lasts about 1 hour.

In the afternoon, Ann will lead the Harp Class in the Wighton centre. From 2 to 3.30, this session is suitable for any harpist and is also open to non-players who would like to watch and listen and find out more about the ancient Scottish harp traditions. Admission to this workshop session is £5.

Ann and Charlie normally live in the States, and rarely come to Scotland to tour. For the past three months, they have held a prestigious fellowship at the National University of Ireland in Galway, where they have been studying and presenting on the connections between the ancient harp music and the singing of old Gaelic poems and songs.

Ann was one of the first people in modern times to bring the ancient clarsach or Gaelic harp back to life. She plays on exquisitely decorated replicas of the medieval harps preserved in Museums, with strings of silver and gold wire.

“I was left breathless by the sheer power of Ann Heymann’s playing…
She wields her instrument like a sword to cut to the heart of the tradition and draw forth its lifeblood…
There is power and magic in her music: It quickens the blood and captivates the soul…
Her music speaks to me at a deep level which is hard to express without metaphor and imagery.”
(The Living Tradition, Edinburgh)

For more information please see Ann’s website at http://www.annheymann.com
Or the Friends of Wighton at http://www.friendsofwighton.com