Music of the old Scottish harpers 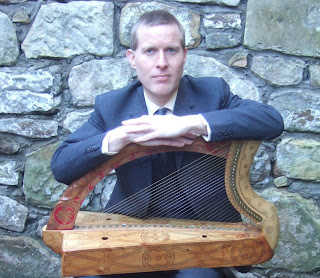 Saturday 21st May 2011, 10.30 for 11am £5
Simon Chadwick: Music of the old Scottish harpers
Wighton Centre, upstairs in Dundee Central Library
Followed at 2.00pm by an open workshop: Discovering Harp Music in the Wighton Collection. All welcome, admission £5 (£2.50 under 25s)

Historical harp specialist Simon Chadwick is presenting a rare concert on Saturday morning, 21st May. The performance will highlight the music of the old Scottish harpers, with pieces composed in Scotland between the 16th and 18th centuries.

Simon will perform this beautiful and little-heard music on a very special instrument – the intricately hand-made replica of the medieval harp of Mary, Queen of Scots, which is kept as one of Scotland’s national treasures in the national Museum of Scotland in Edinburgh.

The concert starts at 11am, and coffee and newspapers will be available from 10.30am, included in the admission price of £5.

Later on in the afternoon, Simon will present an open workshop in the Wighton Collection. He will talk about the music found in the collection, and how the oldest Scottish traditions including the harp tradition are preserved in these historic music books. There will be a chance to see some of the rare books in the collection, and for those that wish, a chance to try their hand at playing a copy of a medieval Scottish harp. This informal afternoon session is open to anyone who is interested to find out more about the deep roots of Scottish music and traditions. Admission is £5, or half price for under-25s.

Simon is based in St Andrews, and has been working on the music and traditions of the historical Irish and Scottish harp or clarsach for over 10 years. His work encompasses the investigation of the surviving museum instruments, research in old manuscripts and printed music books, discovering the ancient styles and idioms, and making connections with parallel traditions such as Gaelic song, fiddle and piping. Simon runs a weekly harp class in the Wighton Centre in Dundee. As well as teaching and performing in Scotland, he is assistant director of the main international event for the instrument, held in Ireland

The Wighton Centre in Dundee Central Library is a dedicated performance and study space which houses the internationally important Wighton Collection of historic Scottish music books. This collection of over 700 volumes dating from the 17th, 18th and 19th centuries was assembled by Dundee merchant Andrew Wighton, and was bequeathed by him to the city after he died in 1866. The Friends of Wighton has been formed to make this unique cultural treasure more accessible to the people of Dundee, Angus and Fife, by running classes, workshops and concerts in the Centre.