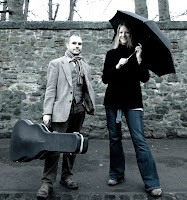 The concert will be at 11am on Saturday 25th April. Admission is by ticket. £4.50, from the City Box Office. Doors open at 10.30am when complimentary coffee and newspapers will be available.

Lucy sang first with Scots singing quartet The Linties. She was the winner of the Muchty women’s singing competition in 2002, and more recently performed in a trio with guitarist Robin Galloway and fiddler Denise Cant.

Chris is originally from Dundee and has recently worked with Mark Dunlop’s new album and Dr Fred Freeman’s projects on the songs of Robert Burns and Robert Tannahill. Chris also works for the landmark Kist o Riches (Tobar an Dualchais) project, cataloguing the Scots song archive at the School of Scottish Studies in Edinburgh.

Lucy Pringle and Chris Wright began singing together at the start of 2008, brought together by a common love of traditional and contemporary Scottish songs. With an emphasis on simple and expressive arrangements, Lucy and Chris’ songs earned them a prestigious Danny Kyle Award at Celtic Connections 2009.

Also on Saturday is the return of the Friends of Wighton’s weekly Scottish music classes. Aimed at beginners, these friendly sessions are a chance to learn to play fiddle, whistle or ancient harp music, or sing Scots songs, with some of the best local tutors.