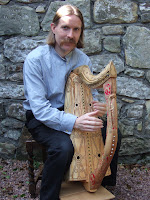 He will be performing a programme of ancient Scottish harp music taken from the historic Scottish music books preserved in the Wighton Collection.

The collection of over 700 music books, mostly dating from the 18th century, was left to the City of Dundee by merchant Andrew Wighton in the 19th century. It is now housed in a purpose-built performance and study centre upstairs in the Central Library, Wellgate, Dundee DD1 1DB

Simon is an acknowledged expert on the performance and traditions on the early clàrsach, the medieval harp of Scotland and Ireland. He will be playing his new replica of the 15th century harp of Mary, Queen of Scots. The original, 500 years old, is preserved in a glass case in the National Museum of Scotland in Edinburgh. Simon’s replica was built for him by a sculptor in Ireland; it is covered in minute decoration, painting and carving, and has strings of gold and silver wire.

The Friends of Wighton hold a lunchtime recital on the first Wednesday of every month. On 7th November the performer will be singer Barbara Dymock, and on 5th December Sheena Wellington will be appearing.

Admission is free; there will be a collection to support the work of the Friends in preserving and making accessible this hidden musical treasure in the heart of Dundee.