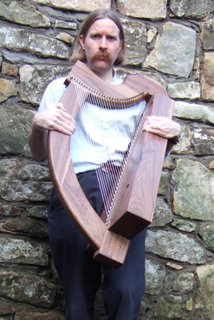 Early clàrsach specialist Simon Chadwick from St Andrews will be showing off a new instrument in Dundee on Wednesday 21st February – a brand new replica of the famous medieval Lamont harp, with strings of brass and silver wire.

The new harp is the latest in a series of replica Gaelic harps that are being made by master luthier David Kortier, of Minnesota, for the Historical Harp Society of Ireland. David visited museums in Scotland and Ireland in 1999 and 2000, to measure and photograph the ancient Gaelic harps. Since 2005 the HHSI, of which Simon is Honorary Secretary, has been commissioning replicas of these fascinating ancient relics. The harps are used by students at the annual summer school, Scoil na gCláirseach, and are also important research tools to help understand how the old instruments were strung and played.

The instruments have been carefully designed by David Kortier, so that although they are simplified in construction and assembled with machine tools for economy and speed, they preserve all of the unusual proportions, measurements and ergonomics of the original. “None of the old harps is in good enough condition to play” says Simon; “they are too old and fragile. Accurate replicas are the only way to hear the original sound of these instruments. Though we would love to give each student a hand-crafted, carved and sculpted facsimile replica, these simplified but accurate Student replicas are the next best thing”.

The original Lamont harp was made in Argyll in the 1400s; it was taken to Atholl in Perthshire by Lilias Lamont in 1460 and was preserved there until it was moved to the National Museum in Edinburgh in the late 1800s. The new replica is a rare chance to see and hear how it must have been when it was new.

Students at the Summer School in Ireland have been delighted and impressed with the Student replicas of the Trinity College harp – Ireland’s national emblem, and famous from its appearance on Guinness labels – that David Kortier made for the HHSI. Perhaps the new Lamont replica will create as much interest and excitement in Scotland!

Simon’s recital – demonstration, which runs from 1.15 to 1.45 pm in the Wighton Heritage Centre, upstairs in Dundee Central Library, will showcase historical music from Ireland and Scotland, played on replica harps: as well as the new Lamont harp, Simon will be playing his replica of the Queen Mary clàrsach which has gold strings.

The new replica Lamont harp is available for rental now to anyone who would like to learn the medieval harp playing techniques, and orders can be placed with the Historical Harp Society for instruments from the next batch.

For more information about Simon’s workshops in Dundee visit
http://www.simonchadwick.net/wighton

For more information about the HHSI Student Harps (including the Student Lamont harp) please visit
http://www.irishharp.org/shop