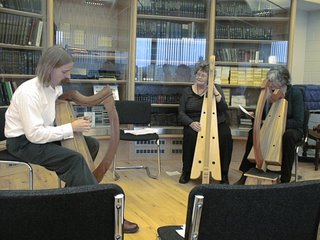 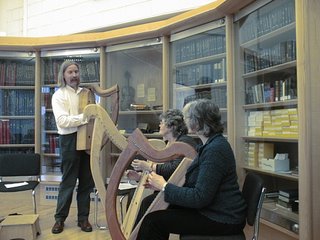 Two lucky attendees were able to try their hand at playing replicas of ancinet museum instruments, as they strugled their way through the tortuous fingerings and subtle sounds of one of the traditional beginners tunes taught to student harpists in the 18th century.

Meanwhile an attentive audience watched their progress, as Mr Chadwick explained the structure of the music, and the techniques for playing this notoriously difficult instrument.

The early clàrsach was played in Scotland and Ireland from over 1000 years ago but it died out in the 19th century, when it was replaced by the familiar modern celtic harp.

Luckily for early music enthusiasts the techniques and tunes of the old clàrsach traditions are preserved in books and manuscripts like those in Dundee’s Wighton Collection.

Simon Chadwick is “Wighton Harpist”, presenting a series of events in the Wighton Centre on the third Wednesday of each month. The next event is a recital of old Irish music played on a replica 18th century Irish harp, Wednesday 20th December 2006, 1.15 – 1.45pm, in the Wighton Heritage Centre, Dundee Central Library, Wellgate, Dundee DD1 1DB.