Graham Carter is a Traditional Singer/Guitarist who is equally at home performing songs of England, Scotland or Ireland.

He originally hails from Poole in Dorset but for the last twelve years has been based in Scotland where he has become well known on the Folk Scene. Indeed as well as being a popular folk club guest, he is the main organiser for both Strathaven Folk Club and Strathaven Folk Festival.

Growing up in a musical household he was often exposed to folk songs at family gatherings around the piano. He began playing guitar and learning folk songs in earnest in his late teens. Graham has gained a reputation as a powerful and compelling performer and considers his many influences to include the likes of Peggy Seeger, Martin Carthy, Joan Baez, Luke Kelly, Ewen MacColl and, of course, Bob Dylan.

“He has that lovely relaxed style of singing that reminds me of happy evenings in West Country pubs.”   Sheena Wellington

Check any online folk music station or magazine these days and chances are that there will be someone running out of superlatives to describe  Christine Kydd’s latest CD “Shift & Change”!  Christine is, of course, one of Scotland’s leading, award-winning singers and recording artistes. With eclectic tastes, she is best known for her treatment of traditional and contemporary songs and her solo set is as likely to include self-penned songs as the work of Marra, Springsteen, Hulett, Wellington, McVicar, Jacob, Tannahill and Reid.

A singer of traditional songs and ballads, she is an international traditionalist, her choice of songs rich and varied, but with a focus on the song culture of Scotland.

She has toured, broadcast and recorded extensively both solo and on a number of projects to produce some of the country’s finest and often award-winning sounds, including singing with Janet Russell, Chantan, Calluna and Sinsheen.

A highly-regarded educator, theatre performer and vocal coach, she recently graduated with a Master’s degree in Ethnology and Folklore. 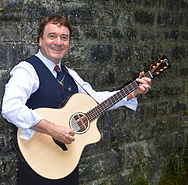 Celtic Strings Trio are Anne Hamilton, vocals and guitar, Morag Sutherland (violin) and Jenny Blain (harp)  and they play and sing a mixture of Celtic and modern music.

Taking influences from songwriters such as Ani DiFranco and Billy Bragg and combining it with the Scottish sensibilities that she learnt in her native Highlands of Scotland, Fraya has worked as a musician in a wide diversity of settings from international harp and roots festivals with The Duplets, to musician in residence with Feis Rois and award winning film/dance/art composer.

This tour sees her striding forth in a solo capacity and features music from her 2017 Celtic Connections composition ‘Community and Stardust’ described as  “a musical and rhetorical triumph, a coherent argument beautifully structured” – David Francis, TRACS, and “…incredibly musical and incredibly thoughtful” Phil Cunningham 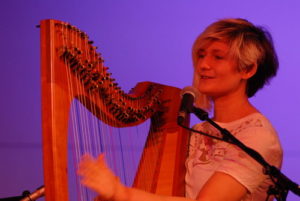 They chose the group name Sakura from the title of one of their favourite pieces – an arrangement by Garcia and Whitworth, of a Japanese piece meaning Cherry Blossom.
They play an eclectic assortment of music from the Baroque, Classical and Modern periods and enjoy playing Argentinian and Brazilian folk music too.

Anne Hamilton says, “Playing in an ensemble provides us with great enjoyment and the opportunity to tackle more challenging and diverse pieces. We have played at various concerts in churches and folk clubs and we are delighted to perform at The Wighton Centre We hope you enjoy listening to our music.”

Bruce Davies, the Fife based singer songwriter will be appearing at Wighton Heritage Centre, Dundee on Saturday 23rd February from 11am to noon.

With 35 years as a professional entertainer behind him, Bruce is a musician whose easy on the ear singing and storytelling have gained him many friends on four continents.  Crisp acoustic guitar playing is one of his trademarks and, as BBC Celtic Roots said, “a voice in a million”.

His recent album “Blowin’ In The Wind – The Other Great American Songbook” has been universally acclaimed and his Edinburgh Festival Fringe show featuring material for the album played to full houses.  He spends his summers hosting and singing in “The Spirit of Scotland Show”.

Throughout his career he has travelled widely, performing in prestigious venues throughout the UK and USA to a huge variety of audiences.  He has recorded extensively as a musician and producer for folk legends The McCalmans, and Harvey Andrews.  In a recent list of “The Hundred Greatest Cultural Fifers…Ever!”,  Bruce featured alongside Ian Rankin, Dougray Scott, Val McDermid, Jack Vettriano and other Fife luminaries.

He has received many plaudits but his most treasured are, from Kenny  Rogers “You do great work!” and when his songwriting hero Tom Paxton introduced him as “ one of Scotland’s best singers”.

Expect to hear the best of music from Scotland and beyond when he makes a welcome return to Dundee for this Cappuccino Concert at Wighton Heritage Centre, Central Library, Wellgate, Dundee on Saturday 23rd at 11.00 – 12.00.  Doors open 10.30am, tickets are £5 and tea/coffee 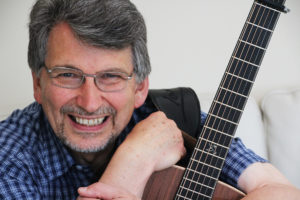 Tom and Kayren Hall, the husband and wife duo who make up SeaTangle, have been involved with music for over fifteen years in the East Neuk of Fife where they play regularly.

They perform a wide range of music which includes traditional Scottish songs and tunes, and a wide variety of other songs gathered along the way.

Tom, a valued member of the Wighton Singers,  sings and plays guitar, drawing on a background which includes Sixties pop, amateur operatic shows, and also helping organise and run music sessions in the East Neuk, while Kayren plays fiddle and djembe.

Brilliant performance to a packed and enthusiastic audience at the Wighton from Shamblestone AKA Elisabeth Flett and Joanna Stark! Next Cappuccino Concert Saturday 19th January. Join us do. 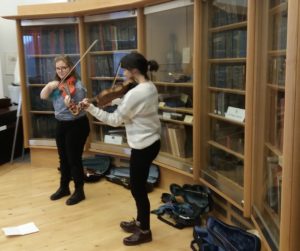