For the third of our Year of Young People Lunchtime Recitals we are delighted to welcome the wonderful Kirsty Law!

Kirsty Law is an innovative young vocalist and song-maker based in Edinburgh.

The mainstay of her musical education came from learning Scots ballads and folk songs from tradition bearers such as Sheila Stewart, Cathal McConnell and Margaret Bennett.

Today she draws on this experience in her own composition, often writing in a ‘patchwork’ style, layering and combining original and traditional melodies, poems and text – and incorporating contemporary sounds alongside her rich Scots vocal. Her song ‘Hymn For A Shepherd’ has been mentioned in the Scottish Parliament and she has released two albums and one EP.

Working with artists of different mediums has come to be the lifeblood of her work – performing alongside poets, storytellers and sound artists as well as responding to the work of contemporary visual artists and filmmakers.

‘Beautiful and fiesty… a musician doing things her own way.’ Karine Polwart

‘Kirsty’s dedication to the tradition shines through her singing. Her sensitive interpretation will touch your heart – not to be missed!’ Margaret Bennett

Music lovers are being thoroughly spoiled at the Wighton over the next week!  Saturday’s Cappuccino Concert features those lovely singers The Quiggs then Wednesday’s Lunchtime Recital stars another great tuneful duo, Karen Hannah and Lindsay Duncan!

A fine fiddle player with an engaging personality, Karen is known to many as “tunemonster” for her unrivalled knowledge of Scottish melodies. The wonderfully named Nifty Shades of Grey, Sporran Again and Ceilidh Minogue are among the many bands she has worked with! She has taught fiddle at the Wighton Centre for many years and her performing career has seen representing Scotland across Europe and as far afield as New Zealand and South Korea.

Another musical globetrotter is Lindsay Duncan, one of the best known musicians on the Dundee scene.    Deeply into music since his schooldays, he is a compelling singer and plays the most beautiful acoustic guitar – check out his version of The Irish Girl on YouTube.             His band pedigree incudes The Mad Parrot Ceilidh Band and The Broon Troot Orchestra and he is an excellent and experienced guitar teacher.

Karen and Lindsay have worked together as a duo and in various line- ups for around ten years.           They promise us tunes, songs and a surprise or two!           I’m looking forward to it and I hope you are too!

Cappuccino Concert with The Quiggs!

Cappuccino Concert with The Quiggs!

Together they comprise “The Quiggs”. Stephen and Pernille share a common feeling for the tradition of folksong and both know a good song when they hear it. The combination of the two voices in close harmony in songs whether traditional or contemporary interspersed with anecdotes and a touch of humour has received much praise from both audiences and organisers. They have toured together in Denmark, Germany and The Netherlands with great success. A concert with The Quiggs is a chance to hear folksong in its original form – simple, yet highly expressive, beautiful harmonies and songs that seek the audience’s participation.

The duo has previously released the album “River of Time” in 2015, which received fine reviews and airplay on several programmes in BBC and other European radio stations. In March 2017 “The Quiggs” released their new CD „Seeds I Didn’t Sow”, which recently featured as album of the week on Celtic Music Radio and was described by Folkradio.uk’s Mike Davies as, “Unquestionably one of the best folk albums of the year.”

Indeed the year ahead looks like a busy one for “The Quiggs” with concert and festival bookings in Scotland and across Europe.

Stephen Quigg, former member of the legendary folk group The McCalmans, has performed as a folksinger for 40 years. Stephen was part of the McCalmans for 10 years during that time, he performed at festivals and concerts big and small both in Scotland and abroad. He continued to work solo alongside his career in the group and has toured the length and breadth of Scotland during most of his life. Stephen’s repertoire ranges from traditional ballads to footstomping songs of battle well mixed with a certain amount of humor. Stephen blends contemporary and traditional material with ease, which ensures a varied evening. Stephen accompanies himself on guitar, bodhran and banjo and with an outstanding voice you can watch him capture the attention of any audience.

Pernille Quigg is of Danish origin but has been living on the west coast of Scotland for the past 12 years. As the surname reveals, she married into the Scottish folk scene after which she herself became part of that scene. Pernille, though, was no stranger to the music and has been singing folk songs for many years, she is now also being noted as a gifted songwriter. Pernille plays guitar and sings in a voice often described as crystal clear. Her repertoire extends from traditional to contemporary to original songs – the common denominator though is, that they all have a story to tell. Pernille released her debut album “Driftwood” in 2012, which received fine reviews in print and was also aired on both Danish Radio and on BBC’s Radio Scotland amongst others.

“The indicators of true quality extend to the individual and collective strengths of the Quiggs themselves, for both are fine singers with a nice line in close harmony, and both are natural experts in the art of choosing excellent songs…” David Kidman, The Living Tradition.

Arrive at 10.30 to grab a coffee and a newspaper, then sit back and relax from 11am-12pm to enjoy the concert!

£5 Tickets on the door, and a suggested donation of £1 for coffee and newspaper. 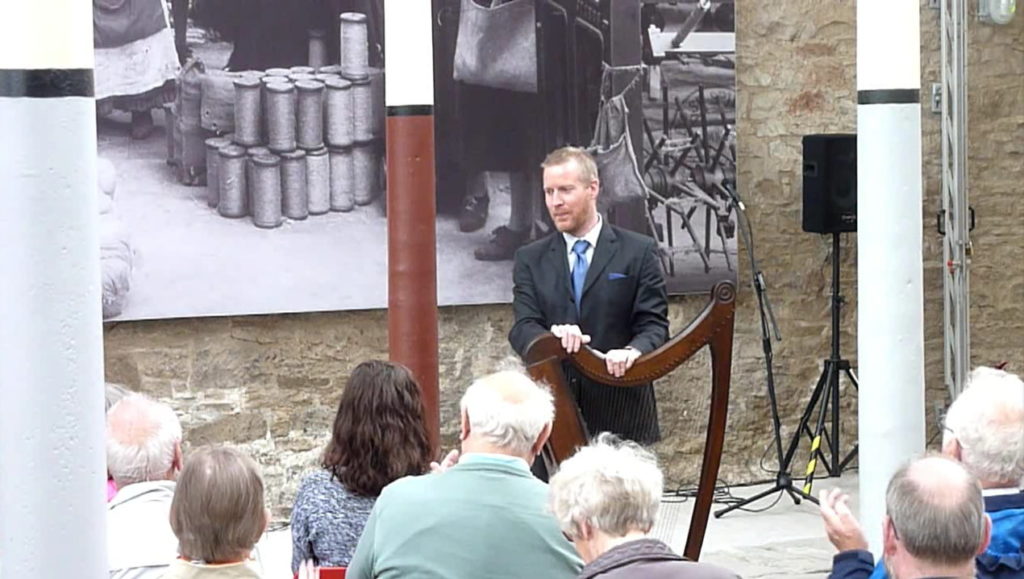 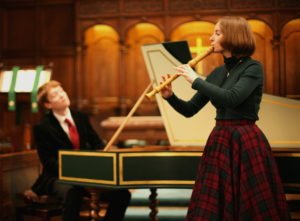 The famous Wighton harpsichord will get a special airing in the second of our April Lunchtime Recitals when the renowned musician and scholar Thomas Allery pays the Wighton Collection a visit!

Thomas Allery is an organist, choral conductor and harpsichordist based in London and Oxford. He enjoys a varied career spanning work as an organist and choral director in church music, continuo playing, research and teaching.

Thomas is the Director of Chapel Music at Worcester College, Oxford, where he is responsible for the musical development of the Chapel choirs and organ scholars. He directs and trains the two Chapel choirs, of mixed and boys’ voices, for regular chapel services and for a busy schedule of concerts, tours and recordings. Worcester College is unique in Oxford in maintaining two student chapel choirs, each of which maintains a separate and flourishing schedule including regular commissions, trips, and performance with period instruments.

Thomas graduated with Distinction from the Masters programme at the Royal College of Music, London, in 2014, where he studied organ with Margaret Phillips and harpsichord with Terence Charlston.

The Wighton Harpsichord is a French double-manual instrument after the C18 maker Nicholas Blanchet. It was built by Mark Stevenson, Cambridge 1983 for the distinguished musician Annette Heilbron (1928–2011) and is widely regarded as one of the finest harpsichords in use today.

We also have the regular first Wednesday of the month Lunchtime Recital from 1.15pm – 1.45pm on the 4th with Simon Chadwick playing traditional Scottish and Irish tunes on the big Irish harp.

Admission to both recitals is free, donations welcome! 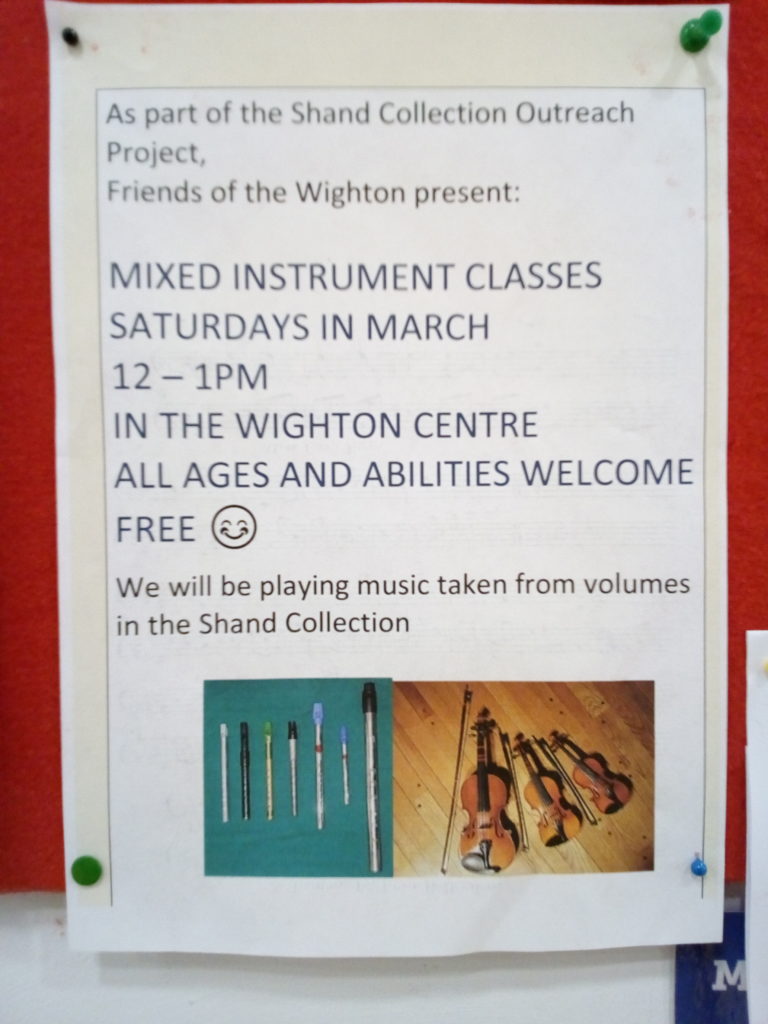 Both born in Bulgaria, Svetlina Stoyanova and Kristina Yorgova are students at The Royal Conservatoire of Scotland (RCS). Svetlina is part way through a Masters Course in performance and Kristina is currently studying for a Bachelor of Music in performance.

Svetlina sang in the Children’s Choir of the Bulgarian National radio and as the main soloist has travelled and sung in many European and Asian countries. As a mezzo-soprano she has taken part in many opera productions and solo concerts. She has won many prizes, most recently, she won 3rd prize in Le Grand Prix de l’Opera and was the highest ranked female singer. Svetlina is very grateful to have received a Help Musicians UK Tutton Award, the RCS Trust scholarship and also to Live Music Now Scotland and Mrs Ulrike Wilson and her family for their continued support.

Having started her music education in Germany and then Bulgaria, Kristina has won many piano competitions, amongst which is the 23rd National Competition for Young Musicians ‘Svetoslav Obretenov’, for which she was awarded with a scholarship from the Ministry of Culture of Bulgaria. In 2015 she won the International Beethoven sonata piano competition in the RCS and 3rd prize at Bamber/Galloway piano competition. Kristina had a solo recitals as part of the 2014 and 2015 Edinburgh Fringe Festival. She is grateful to the RCS trust for awarding her a scholarship throughout her undergraduate studies.

Since meeting in Glasgow in 2013, Svetlina and Kristina have been working as a duo. They have done many concerts and recordings together including a Live Music Now recital in Bulgaria. At the Royal Conservatoire of Scotland they work under the tutelage of Clare Shearer and Fali Pavri.