Janice Clark, one of Scotland’s most respected traditional singers, was born and brought up in Aberdeen and from an early age took an interest in the traditional music and song of the North East of Scotland. Her ballad singing style was heavily influenced by some of the great local source singers like Jeannie Robertson, Lizzie Higgins and Stanley Robertson.  Janice began singing at Folk Clubs and Festivals in her early teens and travelled and recorded with bands such as Iolair, Lang Johnnie More and Highland Connection. She also has an interest in blues music and performed for many years with Aberdeen based blues band, Off The Tracks. Her more recent musical collaborations have been with Lois and the Session Clarks, featuring close harmony arrangements and with Peter McCallum where traditional ballads and songs are presented in edgy, contemporary arrangements. She also performs with her flute player and husband, Malcolm Reavell, longtime member of ceilidh band Halyracket and currently of Straefoot.

Janice began teaching singing workshops at Folk Festivals throughout Scotland and later taught guitar accompaniment for Feis Rois in 1991. Since that time Janice has been a regular tutor at the Adult Feis, teaching traditional song and harmony and an anything goes “Song Extravaganza”. She has tutored for Scottish Culture and Traditions in Aberdeen supporting experienced singers to build a repertoire, develop their individual style and gain performance skills for solo and group singing. 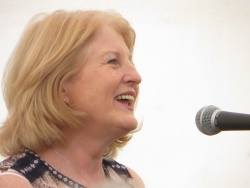