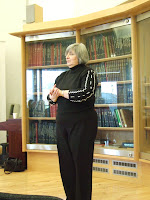 Traditional singer Sheena Wellington will perform the works of Robert Burns and the Irish poet Thomas Moore, for the Friends of Wighton’s February Cappuccino Concert.

Held in the atmospheric setting of the Wighton Heritage Centre, upstairs in Dundee Central Library, the concert is on Saturday 20th February 2010. Coffee and papers are served from 10.30am, and the music starts at 11am.

The distinguished singer will explore the nature of the creative collector, the musician or poet who takes the folk music and song of his or her country and transmutes it into a lasting legacy which in turn becomes a part of the folk culture.

Sheena Wellington, recently inducted into the Scottish Traditional Music Hall of Fame, is widely regarded as one of Scotland’s finest interpreters of the work of Burns. Her fondness for the songs of both Burns and Thomas Moore she attributes to her father, a fine singer from whom she learned much.

Admission to the concert is £5 (includes coffee and newspapers)