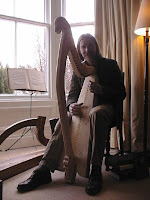 Held in the atmospheric setting of the Wighton Heritage Centre, upstairs in Dundee Central Library, the concert is on Saturday 23rd January 2010. Coffee and papers are served from 10.30am, and the music starts at 11am.

Playing a replica of a historical Gaelic harp, with brass and silver wire strings, Simon will present compositions by the harper-composers Turlough Carolan, Thomas Connellan, and Cornelius Lyons, which he has discovered in the rare old books housed in the Wighton Centre.

Carolan is the most famous of the old Gaelic harpers, though much of his music and song is rarely heard today. Connellan is credited with composing some of the most famous Scottish airs including “Lochaber”; while Lyons was responsible for elegant baroque variation-sets which were all the rage in 18th century Edinburgh.

In the afternoon, from 2.30-4.00pm, there will be a workshop and masterclass on the music of these three composers. Participants will have the chance to see the rare first editions of their music, will find out more about the old Gaelic harp traditions and will have a chance to try their hand at playing replica medieval and baroque harps.