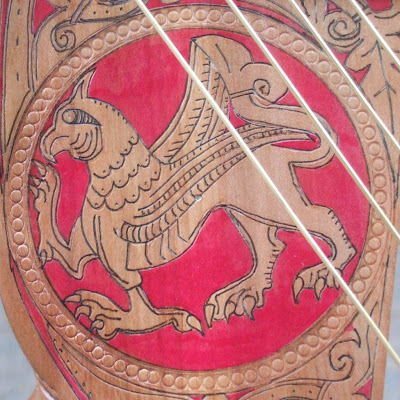 The CD is titled ‘Clàrsach na Bànrighe‘ which is Gaelic for ‘The Queen’s harp’, and which refers to the instrument played on the CD – the amazing decorated replica of the medieval Scottish ‘Queen Mary’ harp which was built for Simon last year.

The music on this CD is drawn from Simon’s recent work both at St Andrews Cathedral, where he gave a sell-out recital series last summer, and at the Wighton Centre in Dundee where Simon teaches a weekly class in historical harp technique, and where he researched the old Scottish harp music as resident musician in 2006-7.

The medieval section of the CD includes 13th century church repertory from St Andrews Cathedral (where the CD was recorded), as well as from Inchcolm island in the Firth of Forth. The second half of the CD presents, for the first time, the complete repertory of John Robertson of Lude, Perthshire, who owned and played the ‘Queen Mary’ harp in the early 18th century. As well as airs, ports and a family salute, it includes a Gaelic song on the battle of Sherrifmuir, which has been newly matched to its original tune and is sung by guest, Mairead Murnion, originally from Co. Down, Ireland, and now living in Dundee.

The CD wil be launched at two complementary recitals, at St Andrews Cathedral on Tueaday 11th March, 12.45-1.15pm, and at the Wighton Centre, Dundee, in Thursday 13th March, 7.30pm.

Simon Chadwick is a specialist in the history, traditions and performance of historical Irish and Scottish harp music. He has been based in St Andrews since early 2006. He is Hon. Secretary of the Historical Harp Society of Ireland, and Assistant Director of its annual summer school, which is held in Kilkenny, Ireland every August and is the main international event for the study of the historical Gaelic harp traditions. Since 2006, he has been researching, performing and teaching at the Wighton Heritage Centre in Dundee, which holds an extensive collection of 17th, 18th and 19th century Scottish music books.