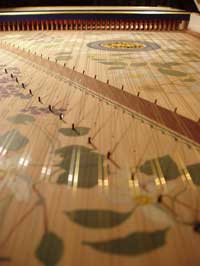 The Wighton Heritage Centre’s beautiful harpsichord can be heard as well as seen at the Friends of Wighton free lunchtime recital on Wednesday 6th December at 1.15pm.

The well known Angus musician Isobel Luke will play a rarely heard keyboard sonata by the 18th Century composer John Christian Luther. Scottish tunes from the James Oswald and George Thomson collections will be played on the recorder by Ethel Allan.

Forthcoming events in the Wighton include an illustrated talk on the Scottish Fiddle by maestro Paul Anderson on Saturday 16th December at 2pm, admission £5/£3(FoW members), while Wighton Harpist Simon Chadwick presents “An antidote to Xmas Muzak” on Wednesday 20th at 1.15pm.

The regular Saturday morning song workshop continues this Saturday (9th December) at 11pm with Maureen Jelks and Sheena Wellington will present the last workshop of the current series on Saturday 16th December.

First Saturday talk of the New Year will be given at 2pm on the 20th January by the renowned Gaelic singer and scholar Anne Lorne Gillies. Anne will be singing songs from her recent book “Songs of Gaelic Scotland” and it is hoped a book signing can be arranged. Admission £5/£3(FoW members).